There is broad scientific agreement on a goal of limiting global warming to no more than 2.0 degrees Celsius, if extreme climatic effects must be avoided and self-reinforcing climate change begins to materialize.

COP15 in Copenhagen in 2009 ended with the so-called Copenhagen Accord , which recognizes that the increase in global average temperature must be kept below 2° C. And the Association of Small Island States (SIDS ), which is one of the recognized groups in the UN negotiations have required that global warming must be kept below 1.5 ° C.

These declarations are missing a statement about the likelihood that this goal can be achieved.

With the new report of September 2013 from the Intergovernmental Panel on Climate Change (IPCC), climate scientists have given a fresh take on what it takes to keep us under 2° C. IPCC indicates a projection that with 66% probability provides a maximum temperature increase of 2° C. The projection is called RCP2.6 ( Representative Concentration Pathway )

Should this goal be kept, then actions to ensure that greenhouse gas emissions peak by 2015 are crucial. In this perspective CCS is not able to deliver adequate reductions, but becomes part of the problem by:

-tying up resources that could be used to reduce emissions

-allowing power plants and industries to continue emitting CO2 for many decades.

The figure below from the International Energy Agency (IEA ) shows that the total reduction contribution from CCS in 2015 will be close to zero, while they in 2020 – even in the technology optimistic scenario of the IEA – still will be hard to spot . Since 2009 the prospects for plants with CCS in operation have repeatedly been impaired.

Between a third and a quarter of CO2 emissions from a coal power plant with CCS will not get captured when taking into account the extra energy needs that the CCS technologies require . (See Climate Effects) This is in itself an excessive contribution to the accumulation of CO2 in the atmosphere.

But that’s not the only drawback:

When proponents say that “CCS can reduce CO2 emissions by 85%”, then it is a picture of a single plant with CCS. If you consider the entire power sector over time, i.e. emissions from all plants between now and 2050, for example, then the picture looks very different.

Reports on CCS lack assessments of how much CO2 will be emitted between now and 2050 from plants until they would be equipped with CCS.

On top of this should be added emissions after they are equipped with CCS.

There is widespread consensus that CCS technologies can only be developed to be used in practice after 2020, and a large deployment of CCS is usually expected to take place after 2030.

The pessimistic assessment of CCS as a climate tool is enhanced by the lack of success in establishing full-scale CCS projects in the coal or gas power plants. One project after another has been abandoned or put on hold.

Global CCS Institute has published a map that provides an overview of 65 projects worldwide (December 2013). 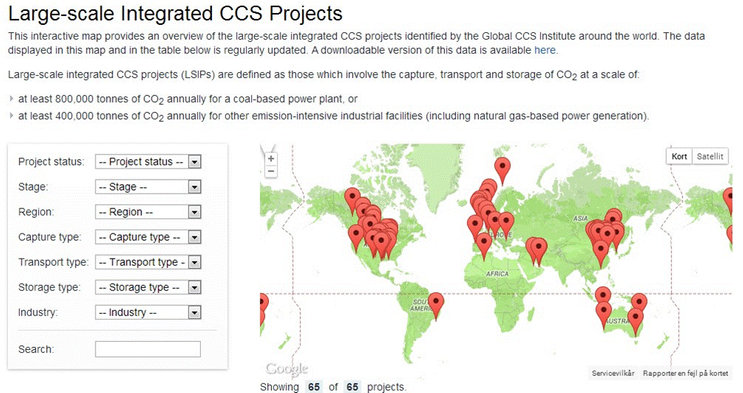